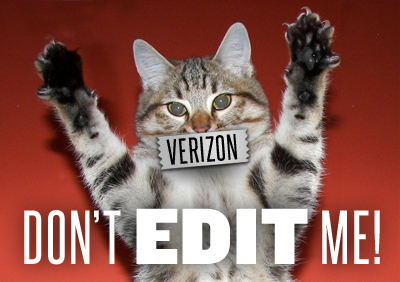 Think you have the right to speak freely via cellphones, websites and social media?

Well, Verizon doesn’t. In fact, the telecom giant is now claiming that the First Amendment gives it the right to “edit” you and everyone else on the Internet.

The company is twisting our most fundamental free speech right to assert that it can control the Internet and your content — just as a newspaper editor picks and chooses the articles that go to press.

In the first brief filed in its lawsuit to overturn the Federal Communications Commission’s Net Neutrality protections, Verizon argues that the First Amendment gives the company the right to block all digital communications that cross its wires, from photographs of your cousin’s backyard barbeque to YouTube videos of human rights violations in Syria. It’s a preposterous claim — and it shows just how far the company is willing to go to control what you do online.

Send this letter to top Verizon executives Lowell McAdams and Ivan Seidenberg. All Internet users must raise the alarm on behalf of free speech online and draw a line in the sand against any powerful entity that seeks to censor us.